INFO: You might remember Colin Caulfield, aka Young Man, from his YouTube covers of indie darlings Deerhunter (posted on the their blog) Animal Collective, Beach House, and some band called the Beatles. He also writes his own songs, and a few of them are up at his MySpace: check out "Five", which features some self-harmonizing and hypnotic production of guitars, spacey synth organs, and various percussive flourishes. This is from a forthcoming release simply called Boy.

ALBUM: Scenes of a Sexual Nature

INFO: Arab Strap's voluminous box set which comprehensively covers their entire early career up to their brief departure from Chemikal in 1998, will be available in all good independent record shops in time for Record Store Day (that Saturday 17th April in case you didn't know). Full details on the box set and its wondrous contents can be found below and you should be able to pre-order the beast from our online shop shortly.

Founded in Edmonton, AB (Canada) in 1979, Bumstead Productions Ltd. has had an undeniable impact on the music scene in both Canada and around the world. Bumstead has excelled in the area of artist management and as an independent record label.
Read more:http://www.myspace.com/bumsteadproductions#ixzz0uL6CaT1y INFO: Trekky Records is thrilled and honored to announce the details for the release ofFrontier Justice, the new album from Embarrassing Fruits. In many ways, Frontier Justice is the first fully realized album from the band. After a series of line-up changes, album delays and promising EPs, this will be the first timely artistic statement from a now permanent trio: Joe Norkus, Lee Shaw and John Neville. Bassist Lee Shaw has risen to become an equal creative force in the band, which was previously an outlet for only Joe Norkus' catchy, textural rock songs. Shaw composed almost half of the songs on Frontier Justice, bringing his love for classic rock and aggressive pop into the deepening inventory of Fruits' strengths as rock songwriters. Both Norkus and Shaw expound upon the frustrations and joys of navigating the nebulous world of late 20s life in the over saturated, vanishing frontier of America.

ALBUM: Where The Messengers Meet

INFO: In an unusual move, the Seattle based Mt. St. Helens Vietnam Band gathered considerable attention before releasing a single song. Instead the band relied on word of mouth, their quirky sensibility and several original ‘PSA-style’ youtube videos which don’t even feature their music. Anticipation proved to be a great ally to the band, and upon the release of several songs from their upcoming EP they succeeded in providing a legitimate basis for all the internet hype.

Lost in the Trees

ARTIST / BAND: Lost in the Trees
MP3: "Walk Around The Lake"
ALBUM: All Alone in An Empty House
FILE UNDER: indie folk
LABEL: ANTI-/Trekky
INFO: Lost in the Trees is a folk orchestra from Chapel Hill, North Carolina. Led by composer Ari Picker, the band merges the dramatic symphonic elements of classical music with the accessibility of American folk, creating a sound that is simultaneously intimate and sonically ambitious.

Thee More Shallows singer Dee Kesler and Ral Partha Vogalbacher lyricist Chadwick Donald Bidwell have joined forces to form a superduo called Fops. In the short time that Fops has been a band, they've already completed two full length albums. The first CD/LP, Yeth, Yeth, Yeth will be released worldwide this fall via UK label Monotreme Records (65Daysofstatic, Nedry, Barzin).
Check out the first MP3s from the album, "Solid Copper Huntress" (HERE) and "Maple Mountain" (HERE).
Taking their musical cues from the syncopated electronic figures of Krautrockers such as Cluster and Faust, and the propulsive, brooding pop of the bands they grew up listening to in the 80's, the duo recorded two albums: Album 1, Yeth Yeth Yeth, will be released in September 2010, and Album 2, Priests In Them Caves, will follow in early 2011.
Both albums are novels at heart, investigating the possible and impossible, gaudy and fantastical, mundane and downright depressing pasts and futures of a single protagonist. In the world of Fops, Kesler is the narrator, telling stories in Bidwell's singular lyrical style.
The vinyl format comes on 180 gm audiophile vinyl and includes a free promo CD of the album.

ALBUM: The Colors of Dreams

INFO: The events of dreams are often impossible, or unlikely to occur, in physical reality: they are also outside the control of the dreamer. The exception to this is known as lucid dreaming, in which dreamers realize that they are dreaming, and are sometimes capable of changing their dream environment and controlling various aspects of the dream. The dream environment is often much more realistic in a lucid dream, and the senses heightened.

INFO: A kindred spirit/long lost friend originally from Tennessee and now in Chicago, Illinois, Nick was introduced to us by Jay Ryan of The Bird Machine. Nick is a talented painter, screen printer, book maker, musician, funny story teller, noise gadget procurement specialist, Southern accent purveyor, and I'm sure some other things we just don't know about yet. He kick started our side label, Placetapes, with his fantastic hand-screened book and cd, The Complicated Bicycle, and is about to head to Europe this Fall for an artist residency. He will be producing new work, which we will show you as we get our hands on some. We can't say enough about him. Look for new surprises on Placetapes. 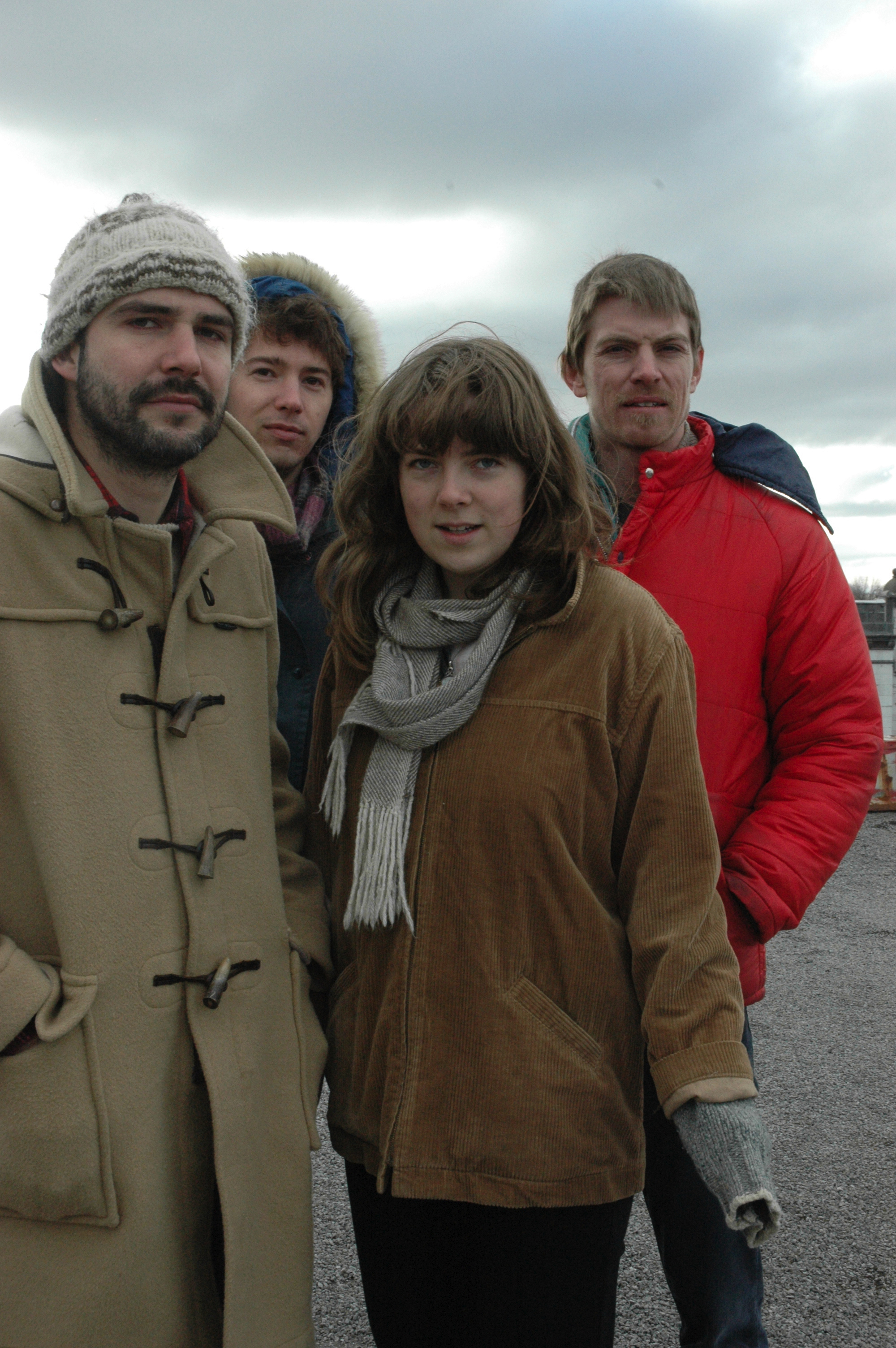 MP3: Tell Your Mum / I Need An Outlet

ALBUM: Candle to Your Eyes

INFO: It’s one of the first days of spring here in Montreal. The sun feels warm, and new green is imminent. There’s a buzz all around on days like these. The winter was cold and long, but it makes the spring sweeter. Shapes and Sizes settled here three years ago. I say "settled" because prior to their arrival here they kept a rigorous touring schedule. Touring with The National, Yeasayer, opening shows for the Silver Jews,Sufjan Stevens; too many shows to get into specifics. So when they arrived in Montreal, there was a feeling of resolution, maybe even hibernation. They carried out their daily chores: one sold books, another records, one studied music and perception while delivering groceries at night, and another never kept her eyes too far from the road.

INFO: At the end of their last year of hard touring in support of their second album ‘Big Eye Little Eye’, which took them by way of Britain and Germany, straight across the USA sharing stages with Canadian luminaries like Feist and Sloan, those who witnessed its fury likely had no inkling it was the end of a chapter for the band. The long awaited homecoming was bittersweet; there were big changes on the horizon. For starters, the band had been released from their record contract; a contract they had been locked into for years that now left them 100% in control of their business affairs. In another twist of fate, their long time bass player, Stew Heyduk, decided to leave the country and get married in Hawaii. Within weeks of being at home and somewhat directionless, the question began looming: “What now?” While there are always songs brewing on lead man Dave Azzolini’s hot plate, the idea of going straight into recording another album wasn’t an attractive one. They needed a break from being Golden Dogs.

MP3: Something I Can Dance To

Something I Can Dance To by The Knocks

INFO: Based out of the Lower East Side of Manhattan, the Knocks are emerging as a force to be reckoned with as far as music production is concerned. Consisting of Ben "B-Roc" Ruttner and James "JPatt" Patterson, the Knocks are named in reference to the early days of their production career when they worked out of their home studios and their complaining neighbors would pound on the walls and ceilings. Years later, they have upgraded to the HeavyRoc Music Studio in Chinatown and are making names for themselves finding and developing talent as well as remixing the likes of other artists and bands.

INFO: In a dark room, through a haze induced by fog machines, you observe celestial projections and pulsing lights. An infectious sound floods your brain-space, a driving synth-rock voyage guided by a female voice which commands attention in its come-hither breathiness. You can hardly make out the shadowy figures responsible for this electrifying experience, and much to the chagrin of photogs, you won't have much luck capturing their live set on camera. However, this disassociation proves blissful: you find yourself dissolving into their sonic atmospherics, dissolving into the packed dance-floor where your body is part of a massive, churning tide.

Drawing from the wells of classic rock, prog, jazz, and punk, their aim is to marry an eccentric approach to instrumentation with the comfort of a songwriter’s voice. The results are anthemic, as well as swooning. Kinetic, while suspended. Seven songs that rock with a confidence not seen often enough. While hints of Television, Animal Collective & Built To Spill may pop into your head, this band invites you in with a sound all enticingly their own.

ARTIST / BAND: The Flying Change
MP3: "Singer" / Songwriter
ALBUM: Singer/Songwriter
FILE UNDER: Americana / Pop / Rock
LABEL: Scarlet Shame
INFO: One year ago, Sam Jacobs, performing under his moniker The Flying Change, released his debut album of love, loss, and reckoning titled “Pain Is A Reliable Signal”.  The album was a searing and brutally introspective accounting of a family’s journey through hospitals, hotel rooms in Minnesota, emergency rooms on the Upper East Side.  And out again.  Seeking a series of cures and treatments that might alleviate a terrible condition.
read more from the source...

INFO: Rob Lowe and Michael Muller, the songwriters and core duo of Austin’s Balmorhea (pronounced “bal-more-ay”), will release their newest full-length, Constellations, on theWestern Vinyl label Februarly 23, 2010. Closely following the release of the group’s critically-acclaimed prior albums – All is Wild, All is Silent (2009) and Rivers Arms (2008) – Constellations further showcases the band’s songwriting and attention to detail, establishing Balmorhea as a major force in contemporary American independent music.

ALBUM: You Won't Be Happy With Me

INFO: “Alt.country rascals Roadside Graves got heavy metal with a jam about “dirt on my lip and blood in my eye” after the singer split his face open with his mic and bled everywhere. I should have taken video because I can’t find anything that comes close to the level of musicianship these tatted-up guys guys now display.”